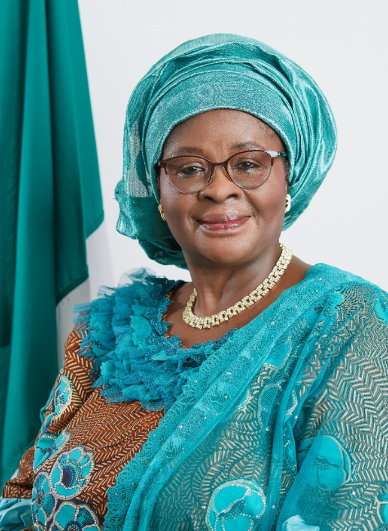 Ambassador Hajara I. Salim, an astute Administrator, Politician and Philanthropist is an embodiment of knowledge and experiences. She holds a Doctorate degree in Management from St Clements University, a Master’s degree in public administration from the University of Jos, Nigeria and a Bachelor’s Degree from the prestigious University College, Cardiff, United Kingdom. Her educational credentials include certificates of several Executive Training Programs from some of the World’s renowned Institutions such as: Executive Education (Women and Power) from Harvard University, Senior Administrative Course from the House of Commons, London and RIPA Leadership Skills Course, United Kingdom to mention a few.

Ambassador Hajara I. Salim started gathering her wealth of experience from 1980 to 1989, as a lecturer at the Staff Development Centre Azare in Bauchi State, Nigeria. She moved to the Bauchi State House of Assembly in 1990 to 1993 as the Clerk of Committees and subsequently, Acting Clerk of Bauchi State House of Assembly. In 1994, She became the Secretary (Logistics) at the Constitutional Conference in Abuja, Nigeria, a position she held up until 1996. At the creation of Gombe State, she was called upon from the National Assembly, Abuja to be the pioneer Clerk of the Gombe State House of Assembly. However, there was a transitional period during which, she was assigned the first female Chairman, Gombe Local Government Area. In the year 2000, she returned to the National Assembly where she retired as a Director, in 2014.

Ambassador Hajara I. Salim thereafter went into active politics in Gombe State where she contested for Gombe central senatorial seat in 2015 and 2019. In recognition of her political achievements, she was appointed into various positions in the Buhari/Osinbajo Presidential Campaign Team. She also received meritorious awards and commendations for her discipline, knowledge, leadership skills and tenacity of purpose especially in the area of political inclusion and decision making.

As a Philanthropist, Ambassador Hajara I. Salim is committed to the wellbeing of the Vulnerable in the society. She is the Founder of Al-Guh Orphanage Home (Gidan Umma Hajara) in Gombe. In recognition of her respect for traditional values, she earned the traditional titles of Jakadiyar Akko (Ambassador of Akko) and Madafan Kaltungo (Reliable Pillar of Kaltungo), both Emirates in Gombe State, Nigeria.

Ambassador Hajara Salim is from Kumo in Akko Local Government Area of Gombe State, Nigeria. She speaks English and Hausa languages fluently. She is happily married with Children and Grand-Children.